You want me to what???  I had been going to the same grocery store for about six months.  I drive farther to go to this grocery store because it’s nicer than the grocery stores closest to my house.  The food seems fresher and the checkers aren’t as creepy (they are still creepy, just less so).  This week, something strange happened.  I came in and the greeter at the door asked me if I could help out by standing up front and greeting customers for an hour. 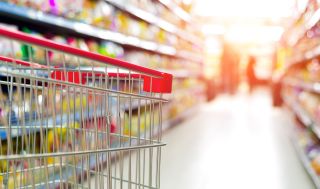 I asked, “isn’t that your job?”  To my surprise, she said it was NOT her job.  She corrected me and said that her job was to recruit and train volunteers to greet.  But, since she couldn’t find anyone, she was doing it herself.  She said, “You have been coming here for about six months.  I thought it was time you give back.”  I was perplexed by the whole thing.  I wasn’t there to give up an hour of my time, I was there to get my groceries and get out.

My grocery store would never ask me to greet.  Why?  Because they know that I am not there to give my time, but to get my groceries.  In church ministry, leaders sense the same tension.  People are not there to give, but to get.  It’s why they are willing to pass MANY other churches on the way to the one that will give them what they want.  But, isn’t church is supposed to be a place to give, not just get?

So far in this “Unsuccessful Ministry” series of posts, I have proposed that numbers cannot be the metric we use to determine success in ministry.  When we base our church success on numbers, it places a pressure on church leadership to do whatever it takes to attract people; to give them what they want rather than what they need.  But, therein lies the problem.  What if what people want (the things that attract people) are directly opposed to what people need?

Let’s face it: People don’t often want what they need.  It’s why we avoid going to the doctor.  It’s why we lament paying taxes yet enjoy all the benefits of our tax dollars like highways, police protection and street lights (this is not meant to be a political statement, but a practical analogy).  I have often found in ministry that what people want is opposed to what they need in some way.  They can usually get what they want by seeking what they need, but it is slow and ridiculous.  And, what they want is often self-centered and directly opposes what is needed.

Take sex for example.  A lot of people in this culture want sex.  A person can literally go out and get the feeling of sex in a matter of minutes.  Sex is not what people need.  What people need is deep, relational intimacy.  The trick is that you can likely get both relational intimacy and sex through God’s ordained plan of marriage.  But, many seeking sex assume it would be much easier to avoid the messiness of relationships and just get a one-night stand, a prostitute, or look at some pornography.  The problem of the easy way, though, is that you cannot get intimacy easily.  Intimacy is never easy.  And, you forfeit your right to intimacy through seeking to gratify your own desires alone.  You may get what you want, but it will cost you what you need.

In Narcissim Epidemic, Twenge and Campbell researched this tension among religious organizations.  They found that the most successful organizations give people what they want.  They found that what people want is “self-admiration” and a feeling that they, as individuals, are significant and important.  But, the church is not meant to be a place that props up our selfish desires, but teaches people to love.  Lest we forget, the very definition of love, according to Jesus is about the selfless act of laying down your life for someone else (read John 15 and 1 Corinthians 13).

This Narcissism forces a consumer-model among churches where the wants of the people are the goal, rather than their greatest need: intimacy with Christ.  And, that intimacy with Christ is often experienced most fully when we have an attitude of giving rather than getting.  I am reminded of Paul telling the Philippians (2:3-5) to do nothing out of selfishness, but instead give themselves to the needs of others and thus have the very mind of Christ Himself.  But, that would be as ridiculous as asking someone to give time greeting at a grocery store.  People don’t want the slow and ridiculous path of commitment to a local church, but what if that is what they need?

The greatest need of the human heart is not meeting the wants of the selfish human heart, but training the heart to give away in selfless love (for Christ and people).

For church leaders, it is too much of a risk to deny people what they want for what they need.  Too few will understand it, and then where will we be?  Our numbers will dwindle, giving will go down, and we will no longer be “successful.”  So, pastors and leaders keep giving people what they want rather than what they need.  Why?  Because in many churches, if the church isn’t growing numerically or if giving goes down, there is a very real threat that the pastor will be fired.  And, the idea of an unsuccessful ministry hits at the core of the church leader’s identity as well.  If our numbers go down, can I really say God is blessing my ministry?  If God doesn’t “bless my ministry” then am I really called?

I say all these things because I am speaking of myself.  I am that pastor; I am that church leader.  I know in my heart there are many times when I defined ministry success in terms that are about my own selfish wants.  I have allowed church, ministry, even my relationship with God to be about what I get rather than what I give.  I have learned the art of veiling selfishness in religious speak and the ubiquitous “I am humbled…” preface.

Part of Jesus’ sermon on the mount addresses getting what you want.  He reminds us not to be anxious to get those things, but to trust the God who provides what we need.  He uses many encouraging examples of God providing the most basic of needs.  The implication is that, if God can provide your base needs, you can trust Him with all other needs as well.  You don’t need to anxiously control everything to get what you want; instead trust the God who knows what you need.  Then, Jesus offers the key to success in life (and I think in ministry as well):

“Seek first His Kingdom and His righteousness and all these other things will be added to you…” Matthew 6:33

Success in ministry happens when the people of God seek His Kingdom and His righteousness.  This is not about getting something, but about giving yourself away to God; His Kingdom and His righteousness.  Foundationally, nothing else matters.  If we can say we are doing that, then we are successful.  Not because of anything you or I have done in our power (numerically or otherwise), but only because we have sought God’s causes and relied on His power.  In His sovereignty, God will be successful.